Warning: Creating default object from empty value in /home/customer/www/handcarryonly.com/public_html/wp-content/themes/salient/nectar/redux-framework/ReduxCore/inc/class.redux_filesystem.php on line 29
 Eating dust and crunching salt in the Atacama Desert, Chile | Handcarry Only

Eating dust and crunching salt in the Atacama Desert, Chile

You are Here: Handcarry Only » Blog » Travel » RTW » Eating dust and crunching salt in the Atacama Desert, Chile

The dust was everywhere, in my hair, in my socks, in my mouth, and liberally coating anything that was not covered. San Pedro de Atacama is a small oasis in the middle of the Atacama desert in Northern Chile, the driest desert in the world. Some of the places in the desert have never recorded rain, ever. Not surprisingly then, that the unrelenting heat from the sun and the dryness gave rise to the omnipresent dust.

A 26 hour bus journey from Valparaiso dumped us in a San Pedro de Atacama at close to midnight, with dim streetlights covering only the central part of town, we shuffled our way in the darkness and the dust looking for our hostel, “an easy 10 minute walk from town”, perhaps in the day, but certainly not at night, disorientated from an obscenely long bus journey and carrying our luggage along dirt roads in the pitch black. We eventually found the place only to learn that hot water was shut off at midnight and we had missed our chance for a shower. Morning was just a few hours away and sleep seemed like the most sensible thing to do.

No obstacle too great to overcome

Almost totally dominated by tourism, San Pedro de Atacama exists as a base to visit the amazing and bizarre landscape surrounding the town, and as a starting point for trips to the famous Salar de Uyuni, just across the border in Bolivia.
We rented bicycles and cycled to Valle de la Luna, or Valley of the Moon, perhaps rather aptly named as the extreme weather conditions have carved a rugged and desolated landscape out of the rock and salt that dominate the area, resulting in a rather moon like terrain. We cycled up a dry riverbed, crusted with a thick layer of salt, looking rather like snow from a distance. Up close, one can see that the salt has formed into sharp crystals and bizarre shapes. Nothing like I have ever seen before.

The bizarre and harsh landscape of Valle de la Luna, or Moon Valley

The salt crunched as we pedalled ‘upstream’, sometimes giving way to reveal a pool of brown mud below. When we reached a sheer rock wall, from which must have existed a small waterfall when the river was still flowing, we promptly chained the bikes together, left them against some rocks and continued on foot. The heat was punishing, and the air, thin and dry, all of which made for a pretty harsh environment to be doing any form of physical activity.
Trudging through the strange environment, we eventually climbed up a large rock outcrop to be rewarded with a panoramic view of the the landscape. At that point, we had no doubts as to why Valle de la Luna was named thus.

The sharp salt crystals present on every surface 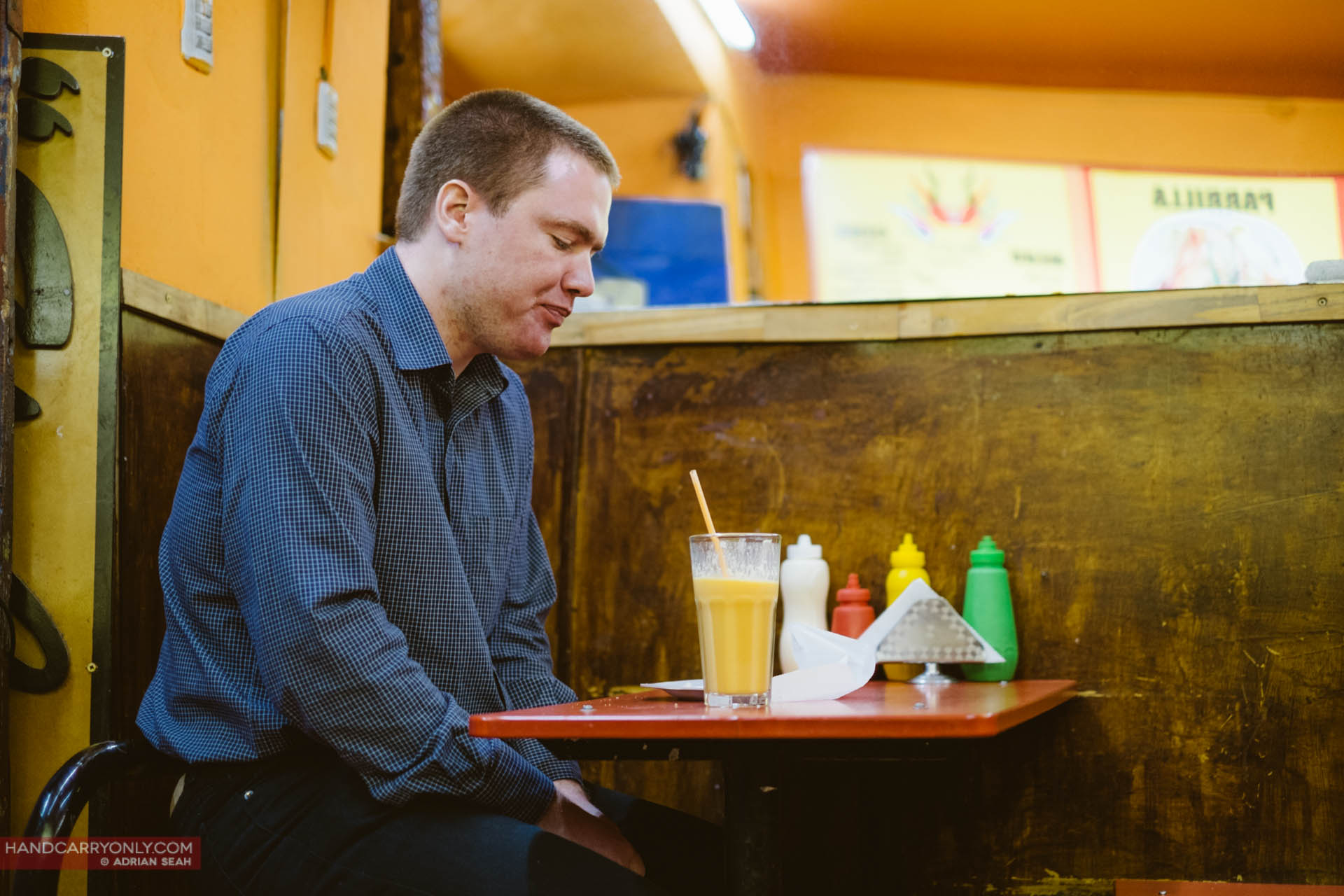 Ode to a bad dinner on the road