Stunning view from The Gap on Robberg Island

It had been raining for 3 days straight in The Crags, with grey, moody skies in between when the rain paused for a break. In contrast to our largely sunny days in South Africa so far, this was starting to feel a bit like my time in London.

The plan was to hike the Robberg Peninsula and we had put it off for the past couple of days due to the weather but we figured optimistically that we would take the chance and go for the hike, despite the grey skies showing no signs to abating. Afterall, we bought our rain jackets for a reason right?

We are by no means seasoned hikers, and the only hiking I normally do prior to this trip was probably just to drag myself to the supermarket around the corner to pick up bread.

Anyway, by the time we approached Plettenberg Bay on the N2, the skies started to clear, and we were driving towards blue skies ahead. With a bottle of water each and a couple of breakfast bars and chocolates for a snack, we began our 5 hour hike. The first half of the hike was relatively easy, passing The Gap and the Witsand sand dune (where we had to make the decision to continue straight and go the whole way round The Point, rather than loop back then). We spotted a large colony of Cape Fur Seals languishing on the rocks below, enjoying the sunshine. A number of them were lazily swimming in the water.

We reached The Point and stood at the top, staring at the magnificent view around us, relatively calm on the left, and pretty wild on the right, with huge waves pounding the boulder strewn shore and rocky cliff face. For some reason, after a short rest, we picked up the path again and carried on, on the return leg of the journey. It wasn’t until about 45 minutes later, when we were quite literally crawling through the bush and undergrowth with thorny bushes stabbing us as we wormed our way through them that we realised that although a faint path carried on ahead, this could not be the regular hiking path. By then, we were somewhere quite deep in the undergrowth, with sunlight coming through the gaps in the leaves above. Unable to figure out if we should continue on the ever diminishing path ahead. Fortunately, I had my mobile phone and Google Maps confirmed that we had indeed taken a wrong turn, probably along a long abandoned path to the now unmanned and automated Cape Seal Lighthouse, the highest navigational light on the South African coast.

A laborious 40 minute backtrack and a few more scratches later, we were back at The Point and on the correct path for the second half of the hike back.

The way back was much more difficult than the first half of the hike, clambering on huge boulders at times and clutching on to for dear life on the sheer cliff face at others. The scenery was spectacular, but we were at all times aware that the beautiful and powerful waves crashing against the rocks below us can just as easily sweep us out in an instant should we slip. Progress was slow and I was determined not to stop in case we loose too much light. I had no intention of trying this hike in the darkness.

Near the end, when were were practically on all fours climbing from boulder to boulder, a guy in tights appeared behind us, standing on the huge rock with a smile. A brief ‘hello’ and a nod later, he disappeared in front of us, practically running and jumping from rock to rock, nimble as a gazelle, whilst the two of us, lumbering elephants, watched in amazement and carried on our slow progress towards the car park and to a nice cool drink that awaited in the backseat of the car.

Sunshine where we are, clouds amassed in the distance

The ‘easy’ side of the hike

The wrong turn, ever diminishing path through the thick bush

A view of The Island just as the sun was starting to set, still halfway more to go 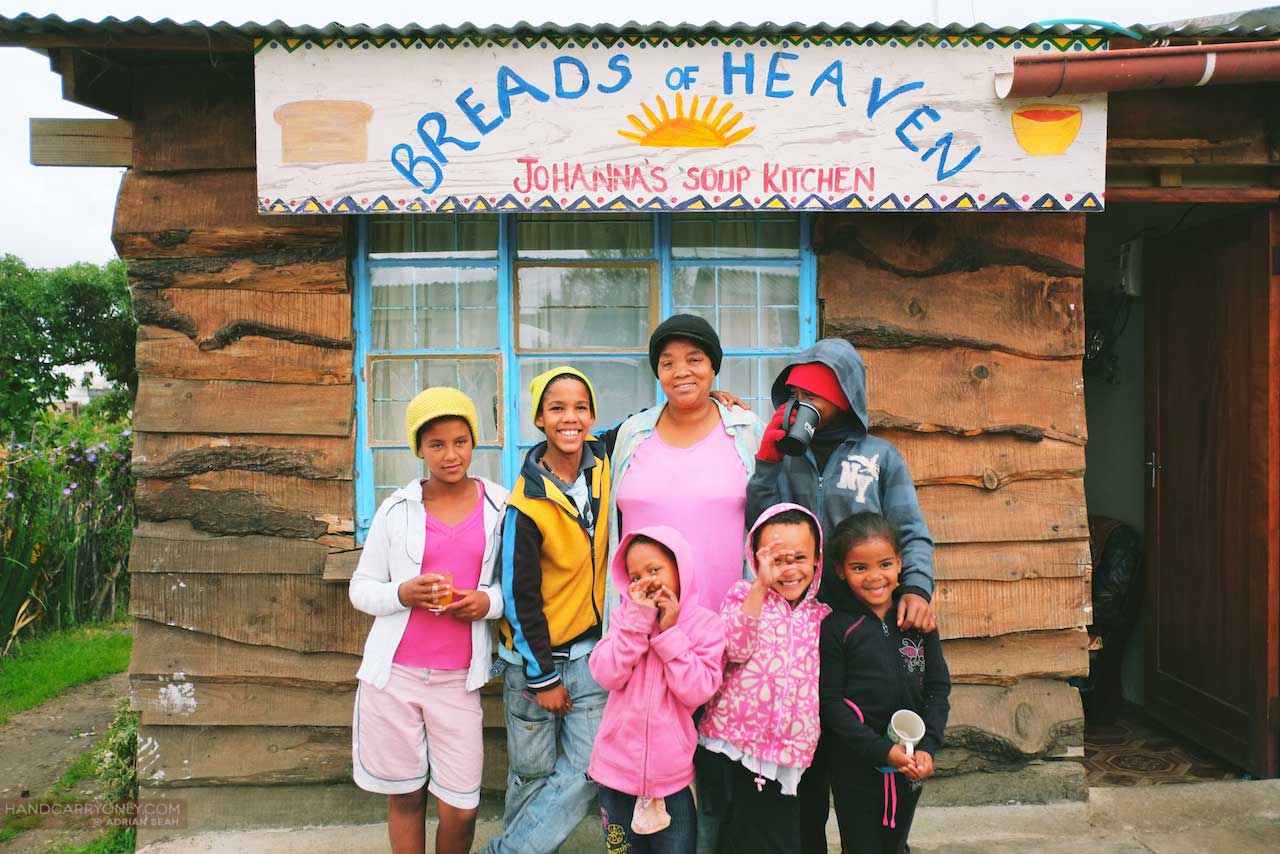 Breads of Heaven, Johanna’s soup kitchen in Kurland Village
Handcarry Only is on Instagram! Follow Handcarry Only!