We were searching high and low for the fabled Titikala, or Rock of the Puma, legendary birthplace of the Incas. Inca lore has it that the children of Viracocha (creator god), first Inca Manco Cápac together with Mama Ocllo stepped out from a large crag in the Rock of the Puma founded the Inca civilisation. A corruption of the name Titikala probably gave rise to the name of the surrounding lake, Lake Titicaca, the largest lake in South America and highest navigable lake in the world, sitting at an oxygen sapping 3812m (12,507 feet).

Landing on Challapampa, on the northern tip of Isla del Sol or Island of the Sun slightly nauseous from the rocky boat ride and too cheap to hire a guide, we figured we would wander the Incan ruins and figure out the key sights by ourselves, after all, the Rock of the Puma should be pretty obvious right? We stretched our imaginations trying to imagine Pumas in every big prominent rock we came across but none of them were a convincing fit. Rock of the deformed otter? Perhaps, or did it look more like a sleeping bear? Rock of the lumpy banana? One would have thought that such an impressively named rock would have been a bit more conspicuous, apparently not.

Nevertheless, the stunning Isla del Sol, sat like gem on the sapphire blue waters of Lake Titicaca. Dotted with small villages, Inca ruins and little else, it was the epitome of tranquilo. We trekked across the island to the southern village of Yumani, passing the villages, small subsistence farms, friendly locals and scruffy kids along the way.

¡Buen dia! we would greet each other as soon as we came within sight.

Ancient Inca trails on Isla del Sol span the journey at various stages, the stones worn and uneven by the constant wear. The underlying rocks were tinged green, betraying the rich copper content below. I mentally thanked the Incan gods that the Spanish conquistadors did not find it worthwhile to exploit the copper deposits, or the island would have most certainly not have survived the onslaught.

A few hours and a lot of huffing and puffing in the thin air later, we reached Yumani and the enormous flight of Inca stairs leading to the ferry pier below. Good thing we were just going down, instead of climbing up.

I stood for a moment at the top to take it all in, the pristine blue waters of Lake Titicaca glistened in the mid afternoon sun, the high altitude and thin atmosphere making the colours just that bit brighter. I silently gave thanks for the privilege of being able to witness this spectacular scene for myself and breathed in the crisp air. 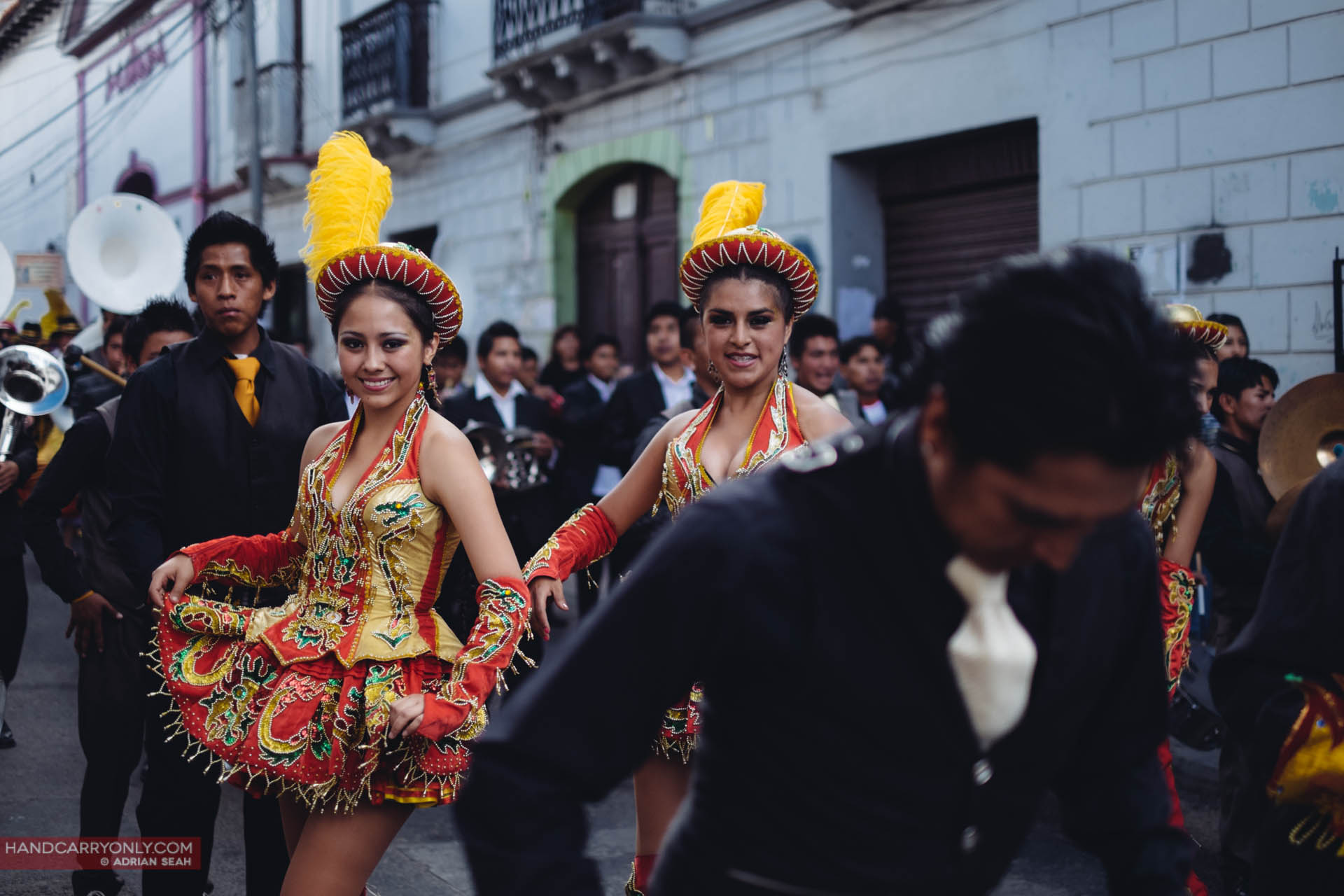 Catholic saints and mini skirts at the festival of San Juan de Dios in Sucre, Bolivia
Handcarry Only is on Instagram! Follow Handcarry Only!